A whole new level of OCD…

Tomorrow I’m off to the latest Patchwork in the Peaks quilt retreat, organised by the lovely Ms E of Busy Needle Quilting (hooray!!!), so I’ve spent a good part of this week pulling together everything I need to take with me. Fabrics for the group project, WIPs I want to work on, a bunch of fat quarters for our regular game of Dice Swap and, of course, quilts for Show and Tell. It was while I was going through my finished tops to dig out something for Show and Tell that I got somewhat distracted by an old quilt top that I keep meaning to quilt. It’s my Flumpagon quilt, and I thought that maybe I should take it with me, to try and get some quilting done during the retreat. Sounds quite a reasonable idea, doesn’t it?

So this morning I decided to get to work to piece the backing, so that I could pack it with everything else. Somehow, the backing fabric was in three pieces, two of which were around 46″ x width of fabric, and one of which was 18″ x width of fabric. Ok, ok, I thought, this is do-able, I’ll just have to cut it up a bit and piece it cleverly together. Then I got started. And this was when my latent OCD went into overdrive! The backing fabric is made of beautiful coloured diamonds, which remind me of a harlequin pattern. At first glance, it looks kind of random, but it’s not; and being me, I realised that I was going to have to do a fair bit of pattern matching if the quilt wasn’t going to bug me horribly every time I used it.

And so I got to work matching up the diamonds. I found the pattern repeat and chose one line of diamonds to work across, and I matched up and pinned the point of every single diamond along that line. 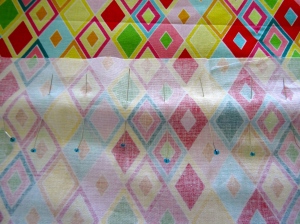 Then, using an open toe foot, I slowly sewed along the pinned line, making sure to sew right through the intersection between the diamonds. This was repeated several times until I’d managed to cobble together a big enough backing piece from all the smaller cuts of fabric I had.

All in all it took a good 4 hours to produce a quilt backing measuring approximately 55″ square. There was a fair bit of unpicking, as well as some Very Bad Language, but in the end, I have to say I’m very pleased with it.

After all, can you see the joins??? A touch OCD? Maybe. But I’m currently suffused with that smug feeling of a job well done, so all in all I have to say I think it was worth it 🙂

Linking up with Lee at Freshly Pieced for WIP Wednesday.