Well, for the first time in ages, I finally have a quilt top finish to report! It’s my Flumpagon quilt (hexagons with elephants…), and I’m loving how it turned out.

I started this quilt a while back, when the Fat Quarter Shop was having a sale on patterns, and this little cutie by Lori Holt of Bee in my Bonnet caught my eye. It’s her Cherry Blossom Table Runner – just beautiful! 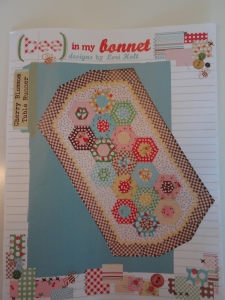 I decided that it was also the perfect excuse to buy some fabric I’d been drooling over for a while – the Madhuri range by Riley Blake Designs, it’s gorgeous, full of bright colours and beautiful patterns, but most of all, elephants. And this would be the ideal project for it. After all, who wouldn’t want an elephant themed table runner??? So I was seriously excited when my order arrived!

The first hiccup came when I looked at the pattern – the table runner dimensions were given as 36″ x 64″.  That sounded awfully large, so out came the tape measure and I measured the table. It’s actually 40″ x 54″. Oh dear…

So what to do? Ok, I could have just made the table runner shorter, but even so it would have been almost as wide as the table. The dimensions were all wrong. So I did what I always do in such situations. If in doubt, make it bigger…

Instead of the 17 blocks Lori put into her table runner, I made 23, and set them as an almost-square, instead of a rectangle. Then I added my borders, a skinny pink one to match the setting blocks, and then the elephant one. It ended up measuring 49 1/4″ x 52 1/4″, and here it is. It’s so pink and lovely! 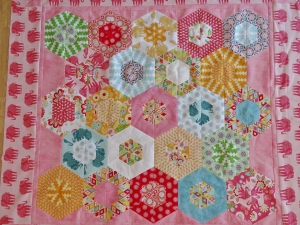 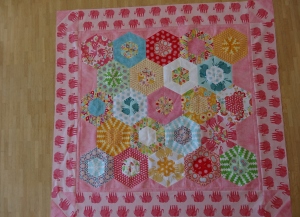 It was also lots of fun to make. Ok, so matching all the points drove me to distraction, and I had to creatively add some cornerstones to the borders due to how the elephant fabric had been cut. I had ordered the right amount of yardage for once, but the top and bottom of the elephant fabric was cut right through the middle of the elephants. So I had nine lines of elephants marching across the fabric, and two half lines of elephants… This was meant to be a Flumpagon quilt, not a flump massacre quilt, so a solution had to be found. It’s not ideal, but oddly enough, I kind of like it 🙂 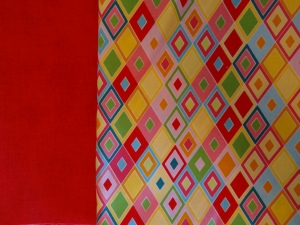 And finally, here it is being examined by Chief Quilt Testers Mr. Boy and Mimi Bubba… 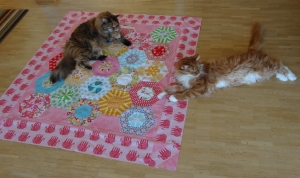 All I have to do now is decide how to quilt it, and decide whether I can bear to give it away. And that will be another story entirely 🙂

Linking on up to Lee at Freshly Pieced for WIP Wednesday.