Last year I decided to enter a sewing competition. As you do. And what do you know? Unlikely as it seems, it appears that I have won first prize, a brand spanking new Bernina 330 sewing machine. I am beyond excited, and not a little bit gobsmacked!

The competition was advertised in Sew magazine, and was organised by Bamber Sewing Machines in Eccles. I paid the princely sum of £18, and for this I was sent a pattern (Butterick 4790 – better known as the Walkaway Dress featured in last year’s Great British Sewing Bee) – as well as the fabric required to make it, a yellow ditsy floral cotton poplin. The rules were simple – use the provided fabric to make the dress in a size 12. Each person entering the competition could enhance and embellish their dress as they saw fit, but they needed to use the fabric provided and it had to be a size 12.

Now, while there will always be a place in my life for ‘quick and dirty sewing’ – whipping up a simple A-line skirt, for example – my real passion lies in couture sewing. I love couture’s perfect marriage of form and function, whereby even the humblest garment can be turned into something truly beautiful and unique through an attention to detail and carefully chosen finishes. If I’m putting time and effort into sewing a garment, I want it to be as perfect as possible. For me, sewing isn’t about speed, it’s about finish, and whatever I make needs to look as good on the inside as on the outside.

This is one of the reasons I decided to enter the dress competition. Not only did the competition allow me plenty of time to create the dress, but it also gave me the opportunity to play with some fun couture techniques and finishes to really make the dress my own. As everyone who entered was supplied with the same fabric, this would be a real test of how good my sewing actually is. By entering the competition, I could challenge myself to do the best job I was capable of. It never actually crossed my mind that I might win!

And so I set to work.

After cutting out the pattern (itself a mammoth undertaking due to the amount of fabric involved!), I sewed the different parts of the dress together using French seams. I love French seams!  I think they give a garment a lovely neat and professional looking finish. I do have an overlocker, and I do use it, but my preference is always for a finished seam wherever possible.

Having sewn the component parts together, I created a full lining for the dress. I line pretty much everything I make; in my opinion, it provides a much nicer finish to a garment, helping it to last longer and hang better on the wearer. And with the fullness of the skirt on this dress, I thought a lining would give it a nice bit of body. And so it did!

Finally, crazy fool that I am, I hand finished the hems on the dress and the lining. Boy did that take some time!

The first real design decision came in choosing what bias binding to use to finish the outer edges of the dress. I initially considered using the plentiful fabric remnants to create my own, but I decided that whilst it would look very pretty, self-binding wouldn’t provide sufficient contrast, meaning that the dress might look a bit drab and washed out. I eventually plumped for a bright orange binding (I do love orange!), which was carefully stitched down by machine and then finished by hand. I’m a sucker for punishment!

The competition rules stated that we could enhance or embellish the dress as we saw fit, but I didn’t think it really needed too much pimping up. For me, the beauty of the Walkaway dress is in its simple clean lines, and the fabric we had been given had quite a delicate pattern. I didn’t want to detract from this by adding too much trim, so I decided that, in this instance, less is definitely more. But the big question was – how to embellish it without overwhelming it?

Now it has to be admitted that I have an irrational love of ric rac, and because of this, I really wanted to incorporate some into the finished garment. And whilst on a sewing course earlier this year, my lovely friend Cindy Dahlin showed me some divine little flowers and leaves she had made by intertwining two strands of ric rac.

I immediately knew that was the trim that the dress needed; all the other ladies on the course agreed – and so the decision was made!

I chose two contrasting shades of pink to pick up the colours of the flowers in the fabric, twisted them together, pressed them flat and attached them by hand to the dress, allowing a little bit of the orange binding to peek out at the edge.

Finally, I decided that the orange of the bias binding needed pulling out a little more, so some skinny ribbons were created using binding remnants, tied into a bow and attached to cover the spot where the ends of the ric rac trim met on the neckline. 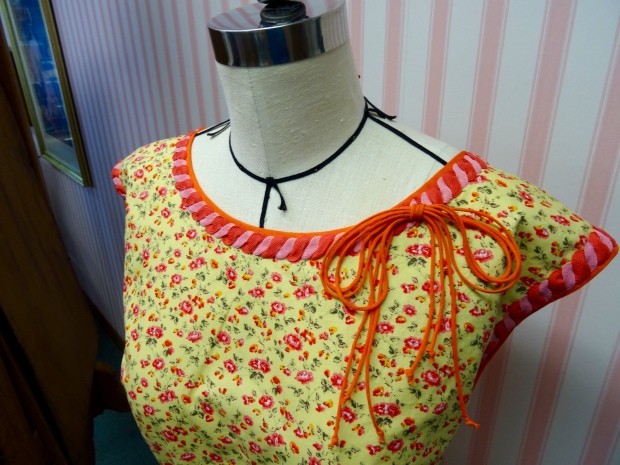 I followed the pattern pretty much to the letter (a first for me!), but when it came to the closures at the front of the dress, I departed from the instructions. The dress, if made to the pattern, would be closed with three poppers, sewn onto the bias binding at the waistline, meaning that one front panel of the skirt would have to lie on top of the other. Not only would this totally spoil the line of the trim, I also had some doubts about how secure a closure poppers would be – I felt they were highly likely to fail my “donut test” (which consists of imagining how something would fit were I to go on a sugar bender and polish off a dozen Dunkin’ Donuts in one fell swoop…), and had visions of the dress pinging open at inopportune moments.

And so I elected to use hooks and eyes instead, to ensure the skirt stayed fastened (no matter how many donuts were consumed!) and to allow the two front panels to lie edge to edge when closed. They were attached using a modified tiny blanket stitch, using green silk buttonhole twist – which was also used to create bra-strap carriers and swing-tacks to attach the lining to the outer dress fabric at the hem.

The dress was now completed…

… but I still felt that something was missing. And as is often the case with dressmaking projects, there was a fair bit of fabric left over after cutting out. Now given the cost of fabric in Switzerland, and the fact that I’m a quilter, I am somewhat obsessive about not wasting fabric. So I decided to use some of the fabric remnants to make a co-ordinating little clutch bag, which I lined with orange striped fabric, and embellished with the same ric rac trim as the dress and an orange button to match the bias binding. I think it complements the dress perfectly and completes the outfit. 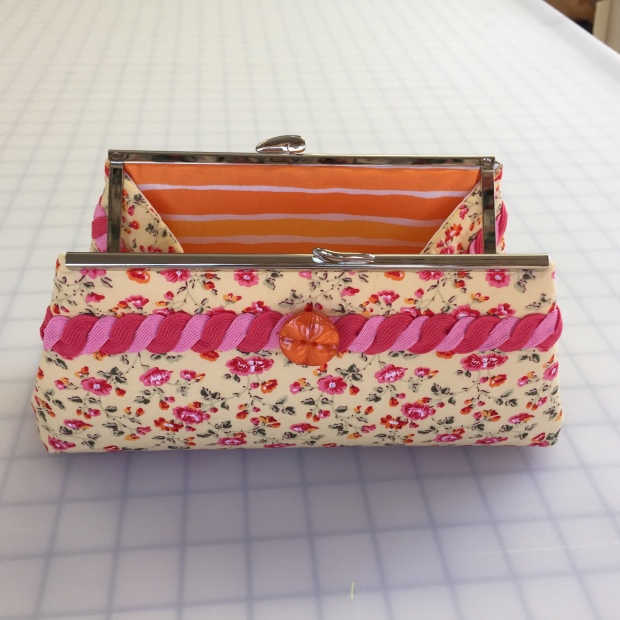 So here’s to my winning walkaway dress! I never imagined I’d win, but a lovely new sewing machine is sitting in my mum’s spare room as I write. I can’t wait to go and visit her so I can get sewing with it. And I hope that this might persuade other people to take the plunge and enter sewing competitions. Because, as I found out, you never know…